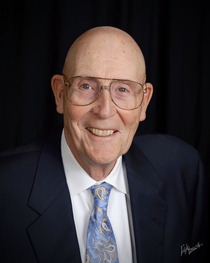 Dan was born at home on "the second hill southwest" of Couch, MO. his mother Ruth descibed him as: "red,wrinkled, and ugly - but oh so very sweet."

He graduated from Couch High School in 1952. In 1957 he was drafted and proudly served his country in the U.S. Army. Labor Day weekend 1957 while hiking on Mt.Rainier he met "my sweet Suzie" They were married June 23, 1962 and had two children.

In 1969 Dan moved the family to 'God's country" Newark, California. He attended and served at First Presbyterian Church of Newark and later at Centerville Presbyterian Chuch in Fremont. He was always there with a kind word, to lend a hand, and share a laugh to share.

After being discharged from the Army he began working in the printing and paper industries. He retired in 2003 after which he was know to enjoy long naps in the chair with "the Hound"

He was preceded in death by his parents, Ned and Ruth Rhoades, older brother Ned Jr, younger brother Jack, mother and father-in-law Muggs and Cushing Coates, and brother-in-law Tom Coates.